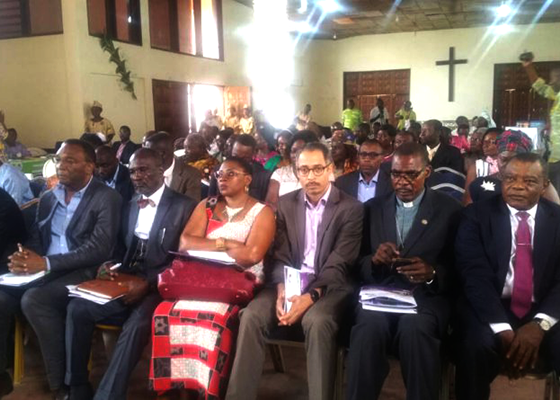 Therefore choose from among yourselves, from each tribe, wise, able and reputable persons, and I will make them leaders of the people” (Deuteronomy 1:13) BFC

Cameroon’s Council of Protestant Churches on the assault on elections

Last March at the multipurpose center of the Council of Protestant Churches of Cameroon (CEPCA) located at CEPER street in Yaoundé, the official launching ceremony of the project entitled “Advocacy for free and transparent electoral processes in peace in 2018 was held. in Cameroon “. About 350 people were invited. In addition to the main actors in the implementation of the project, there were several personalities from various backgrounds including government, religious denominations, civil society, the private sector, development partners, embassies, universities and media. The eleven church leaders who are members of the Council of Protestant Churches of Cameroon were present and it is Rev. Fonki Forba, General Moderator of the Presbyterian Church in Cameroon (PCC), 1st Vice-President of CEPCA who led the opening meditation and Rev. Robert Goyeck Daga, General President of the Lutheran Fraternal Church of Cameroon and President of CEPCA gave the official launch address of the Project.

An expression of the sovereignty of the people, a pillar of democracy and moments of celebration of human rights, elections are at the same time a pivotal period in the life of a country. Indeed, this is one of the rare times when citizens are called to participate directly in the running of the country’s affairs through the choice of representatives. In Cameroon, each electoral consultation is generally punctuated with insults, various violations of electoral standards, denunciations, more or less well-founded counter-denunciations, physical violence. So many obstacles that have often given rise to fear of the worst for the continuation of the democratization process thus initiated. A pioneer of the Churches of Cameroon in the field of election observation, CEPCA is more than ever called upon by the faithful and the public to reclaim its place in the promotion of democracy and the rule of law in Cameroon. CEPCA has benefited from its partners, a grant of 160,000,000 FCFA for the implementation of this program.

The CEPCA in the context of the 2018 electoral deadlines, makes its obvious contribution to the smooth running of the elections. It intends to ensure transparency, freedom, respect for rights and democracy in: