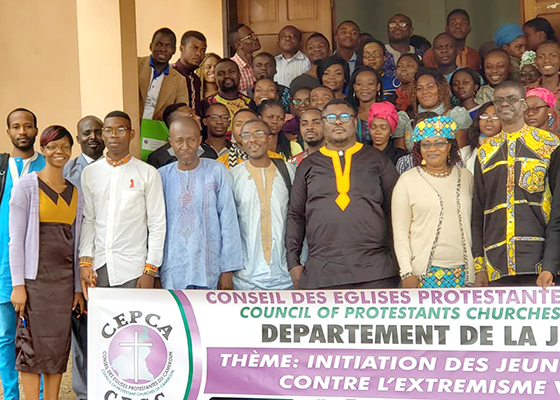 The project “Action for education in citizenship and integrity for young people in disadvantaged neighborhoods of Yaoundé”, initiated by Cepca and which benefited from micro-funding from the Catholic Relief Service (CRS), aims to raise awareness among young people Komkana and Melen neighborhoods in Yaoundé, so that they adopt civic and responsible behavior. Beyond these young people, it is all the Cameroonian youth who are thus challenged as recognized by the Secretary General of CEPCA, Reverend Philippe Nguete. In densely populated neighborhoods where there is a certain promiscuity, young people engage in activities such as alcoholism, drug consumption, prostitution, theft and scams, abuse of trust, with the added bonus of lack of ‘a certain identity for some. These exposed and involved young people usually come into conflict with the law and thus run the risk of being the subject of an altercation with the police, which could lead to imprisonment. They were therefore built on the role of the police, municipalities and traditional authorities in the fight against crime. Yvon Mabote, lawyer and Human Rights Expert at the Ministry of Justice, took the opportunity to show young people how their rights are protected in the code of criminal procedure.

It is therefore within this framework of the fight against criminal activities involving young people that the youth directorate of Cepca organized on May 4, 2012 in Yaoundé, a public conference to challenge young people on the harmful effects of drugs. This conference, whose theme was “Young people and the law: for a collaborative approach between young people and public law enforcement and law enforcement institutions for the fight against crime”, aimed to create a framework for exchanges and discussion between young people and public institutions in charge of order and repression in the context of the fight against criminal activities involving young people. According to the Director of Youth of Cepca, Bertrand Tientcheu, during this conference it was a question of “presenting to young people the law not only as an instrument of repression but also as an instrument of protection of their dignity and their integrity. . Because by engaging in criminal activities, they destroy their personality, their integrity and their dignity ”. The young people present at this conference also watched a 30-minute short film entitled “Who’s to blame?” Which presents the ordeal of two young people enlisted in illicit activities such as prostitution and the sale of drugs. Bertrand Tientcheu, the Director of Protestant Youth, adds that this film will be “an instrument for raising awareness among young people” through educational talks, discussions, screenings in neighborhoods and churches. It will soon be broadcast on a Cameroonian television channel.

In Cameroon, 60% of drug addicts are around 20 years old and 15% are younger. These statistical data are the work of the National Drug Control Committee. A survey conducted in 2002 by Cameroonian researcher Emmanuel Wansi revealed that at 15 years old, one in four young people admit to having used drugs at least once in their life. Another study carried out in 2008 with 12,000 second cycle students in schools in Douala shows the growing addiction of young people to illicit substances. They are 60% to have tasted it. Their repeated employment affects 24% of them, with girls experiencing a meteoric rise. In terms of intensive consumption, 8% use it more than 20 times per month. Today, the average age of first smoking is 14, according to data available from WHO. Beyond alcohol and tobacco, young people divert certain products including glue from their use. Psychotropic drugs and hallucinogenic mushrooms have even appeared in the playgrounds, as is shown by the case of a network dismantled a few weeks ago at the bilingual high school in Yaoundé. Weekends, holidays, decompression activities after exams, surprise parties and other outings are good times to get out of the arsenal, with sometimes dramatic consequences: decreased vigilance at the origin of accidents in the traffic, violent behavior, assaults, rapes