Celebration of the 500th Jubilee of World Protestantism in Cameroon 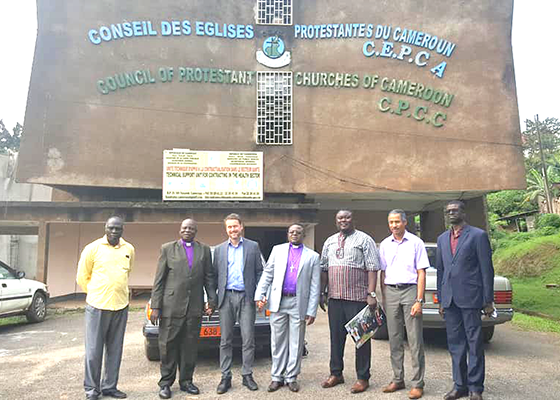 Theme: “Remember all the way that the Lord your God made you take … and that brotherly Love binds you” Deut 8.2 a and Rom.12.10

This year all over the world by Protestants who remember that on October 31, 1517, Luther had posted in Germany the 95 Theses on the Origin of Protestantism.

The jubilee will take shape in Cameroon through demonstrations and activities that mobilized member churches of the Council of Protestant Churches of Cameroon (CEPCA) from October 2017 to October 2018 across the entire Cameroonian territory, thus offering Protestants , the opportunity to commune together as the first fruits of the realization of a common dream, of a Protestant church united in Cameroon by 2040, formalized in the motto of the CEPCA “Being-Church-Together”.

For the Rev. Pierre Agalgaba, present from CEPCA / Est, “ this motto is a commitment in a sub-regional and global context where identity withdrawal, rejection, intolerance and religious fundamentalism are taking on ever more worrying proportions, resulting in by acts of violence of another age perpetrated against co-religionists or against followers of other faith communities. “

This theme commits the CEPCA in a duty of remembrance, to revise the paths of Protestantism in Cameroon. The purpose of this celebration, according to Rev. Martin Ndanga Sola, regional bishop of the EELC in the East, to deepen within the member churches, the common identity and the confidence in CEPCA as their official representative. Give the position of Protestants on issues and positions of common social, economic, and political interest.