The women of the Protestant church are mobilizing in support of the defense forces.

Home /Departments/Women and Social Affairs/The women of the Protestant church are mobilizing in support of the defense forces. 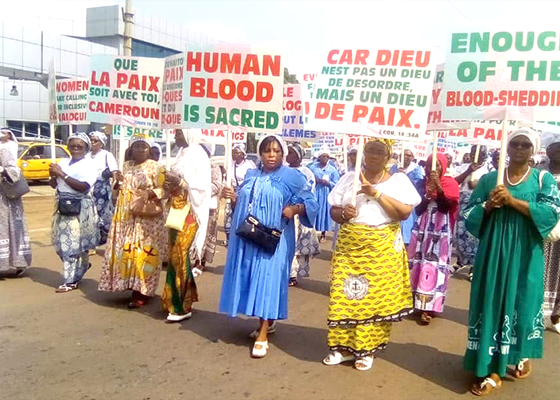 Their contribution went beyond the symbol. It was a strong sign of protest against the atrocities of the terrorist sect Boko Haram. Protestant women, 11 movements mobilized by the Council of Protestant Churches of Cameroon (CPCC), gave their voice last Saturday at Boulevard du 20 May. A great march followed by a cult for peace in Cameroon, while the old one, they observed a day of fasting and prayer throughout the national territory. In their songs and praises, they expressed a commitment to non-violence. Because, argues Dr Delphine Hiom Etoua, Executive Secretary of the Department of Women and Social Affairs of CPCC, “women are the first and main victims of war. We are being raped. It is our husbands who are conscripted into the war and who are being killed. We are the ones who carry burdens over our heads, carry around children and pregnancies because we are fleeing war. It is up to us that in the Far North, women gave birth in the open, without care. “

Faced with these dark and dismal clichés of women in wartime, it is the family that is disturbed and destroyed. And the presence of Prof. Marie-Thérèse Abena Ondoua, Minister for the Promotion of Women and the Family (Minproff), gave meaning and substance to this plea to the Lord. Because they have a strong spiritual and social role, the Minproff hoped that their abundant invocations for peace would be answered by the Lord. “We also invite all populations to join them in raising awareness against non-violence, so that peace can return to our families. Because, if they are at peace, the whole nation will be stable, ”noted Minproff. In their activities, the women of CEPCA wanted to comfort the victims of Boko Haram and fight against all forms of violence based on gender.